You are here: Home / parenting / Banning Children from Restaurants 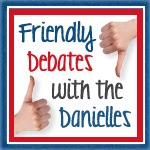 Danielle of Happenings of the Harper Household and Danielle of We Don’t Have It All Together, But Together We Have It All host a weekly blogging debate. This week’s topic is Banning Infants/Toddlers from Restaurants.

Personally, I don’t have any issues with restaurants that ban infants and toddlers. Restaurants have the right to determine their clientele and the ambiance of their restaurant. If an upscale restaurant requires men to wear jackets or disallows flip flops, no one thinks twice about it. I don’t see that much difference in refusing service to people who come in with small children.

This isn’t meant to be a hit on parents with young children, and I understand that there are some children who probably can and do behave well in even the fanciest of restaurants. The fact remains, though, that infants and toddlers are, overwhelmingly, unpredictable. Even the mildest, best-behaved of infants and toddlers can have the occasional melt down, and everyone has encountered that family at a nice restaurant who has the toddler that’s climbing up the walls while the parents totally ignore it.

If the restaurant markets and prides itself on having a quiet, peaceful atmosphere, especially if it’s a very grown-up restaurant with complicated and expensive foods and breakable/flammable decor, I can totally understand why they wouldn’t welcome small children. Part of eating out, in my opinion, is the experience, and one squalling infant–no matter how quick the parents move to take the baby out to the car–can easily destroy the experience.

The thing is, I don’t think most children get much out of the types of restaurants that ban kids anyhow. They’d probably much rather be somewhere where they can eat grilled cheeses or plain spaghetti and meatballs and where if they yell, the restaurant’s already so loud people aren’t going to notice. Bonus points if the place has an arcade or open area where playtime is encouraged. It just seems to me like it would be easier on all involved to take the kids to places that are kid appropriate and find a baby sitter on the nights you want to go someplace that has a more grown-up atmosphere, regardless of whether they have a ban on small children or not.

I think most restaurants are aware of their target demographic, and while those that ban small children might lose business from some families, they will probably gain just as much business from people who appreciate knowing they can have a quiet, kid-free night out at that restaurant. Considering that a lot of those people are other people with kids, I don’t think it’s meant to be an all-out attack on children or parents, but rather, meant to create a get-away environment where grown-ups can relax for an evening. I can appreciate that.

Suggestion for next week’s debate: Thoughts on co-sleeping?

Connecting with Your Intentions

The Legacy of Love

What I Wish I’d Known Before I Became a Mom

Bad Behavior has blocked 335 access attempts in the last 7 days.