You are here: Home / holidays / It’s not just the seasons changing

The last couple of weeks have been so busy! There’s so much to share, I’m just going to jump right in. 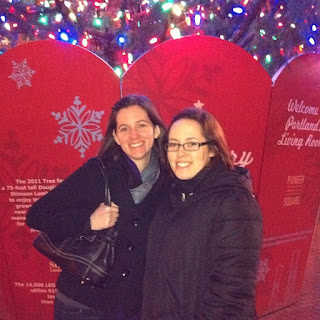 I had two separate sets of friends from college come into town in the last few days. On Friday, it was my bestie and roommate from college and her husband, whom I also went to college with and who is consequently also an old, good friend. Then on Tuesday, another college roommate kept me out until after midnight. (It takes a lot to keep a pregnant lady up past 9 o’clock on a school night.) I had so much fun with them. I’ve known these folks for about a gazillion years, can credit them with some of my less than stellar decision-making from my younger years (although always in the pursuit of fun!), and can probably never STOP being friends with them because they have way too much dirt on me to be anything else. 😉 It was so good catching up on their grown-up lives (Nick is in grad school and almost finished with his PhD, Erica directs an internship program at a major university, and Elyse was in town interviewing for OHSU’s residency program–incredible!) and reminiscing about the good ol’ days. Being around them made me feel simultaneously very young and very old. It’s just so weird to think about how much time has passed and how much we’ve all changed…but we all have stayed pretty close. I’ve never really had friends like that before, so that’s incredibly special to me.

On Sunday, Kellen and I had our holiday band concert. Both of us play in an adult band for one of Portland’s outlying communities. It went surprisingly well and was a little bittersweet since I know this will probably be our last holiday concert playing with them. I started playing with them when I first moved to Portland 4 years ago, then Kellen joined the following summer when he was living with me while doing an internship program here in the city. I joined this group when I was brand new to the city and barely knew a soul, and they have celebrated with us for our engagement, our wedding, and now our baby. It is just weird to think that we won’t be performing with them anymore, at least not for a while, after the baby gets here. I’m really going to miss them. We’ve got another performance with them for the holidays this weekend, though, and two more concerts in February, so I’m going to try not to get too emotional about it just yet.

Last week, I also found out for sure that I’m being given a promotion at work. It’s a promotion that I’ve worked (and lobbied) very hard for, and I feel like it’s a big pay off for all the blood, sweat and tears (okay, so mostly just tears–and only at home, with my husband, with no coworkers around to mortify myself in front of) I’ve poured into my work for the past few years. I really love what I do and am so excited to have the opportunity to take greater responsibility and ownership over the work that I do. The fact that I’m going to be returning to a team that I previously worked with and loved is just icing on the cake.

And two of our closest friends here in Portland are expecting to have their baby any day now! We know for sure that if the baby hasn’t gotten here by next week, Rachael will be induced on Monday, but signs are pointing to her maybe going into labor sooner…in which case, it’s going to be a very, very exciting weekend.

Things keep changing so quickly. I’ve barely had time to process it’s the holidays at all. I just hope the next 3 months move as fast.

Previous:
26 week update
Next:
How is Christmas just a few days away?

Bad Behavior has blocked 1002 access attempts in the last 7 days.